Hearty, moist, and bursting with flavor, these meatballs begin to vanish in our house the moment they are cool enough to safely eat. Even when I cook a double batch, we rarely have leftovers. This recipe makes about 25 meatballs.

2½ teaspoons sea salt (or to taste)

Thoroughly combine all ingredients in a large bowl. I find the best tool to achieve this is simply clean hands. Be careful not to mash everything tightly together.

Fill pot that you will be using to fry with 2-3 inches of oil, and heat on medium or medium-high heat. The oil is ready when a small amount of meatball mix dropped into the pot begins bubbling immediately.

Deep fry the meatballs in batch sizes appropriate for your frying pot for only one minute to establish a thin crust.

Remove and allow to cool briefly before arranging on your baking tray, preferably using a baking rack.

Bake for about 20 minutes, until just cooked through. You can confirm this by cutting into the largest meatball to verify it is done.

They are ready to serve! Please save a few for me. 🙂 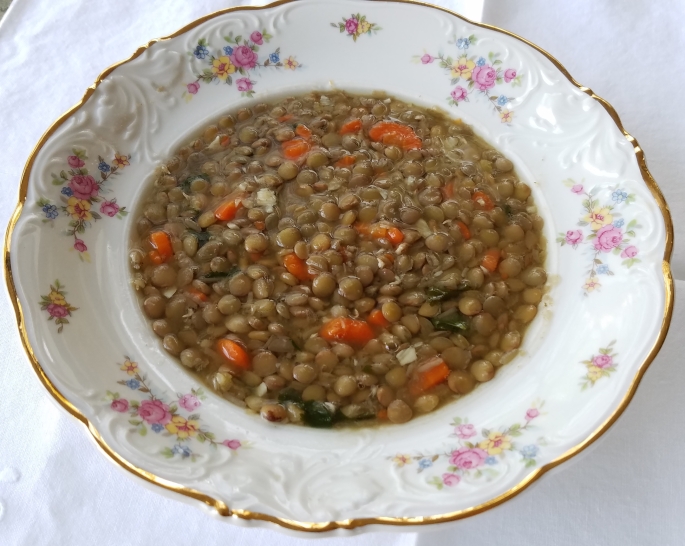 Brown lentils typically have a bland, slightly peppery flavor. Taking the time to allow them to soak and sprout allows them to develop a natural, subtle sweetness. Combined with the carrots, fresh cilantro, and lime, it produces a delicate and fresh flavor that has become a welcome addition to our table, and is prepared almost weekly in our home. I’m also pleased to report that even our children look forward to this on the menu. If they approve, it must be good!

half a head of garlic, peeled and finely minced

Soak the lentils in a large bowl of water overnight. Drain them in the morning and allow to sit for four to six hours to begin sprouting.

Heat on the stove on medium high heat until boiling. Cover and reduce to a simmer, stirring occasionally until most of the liquid is absorbed, and the carrots and lentils are quite soft. About 20 minutes.

Remove from heat. Remove stems from cilantro leaves, and add the cilantro leaves and juice of half a lime, and any additional salt and pepper to taste. Stir thoroughly, and allow to rest for 15 minutes before serving.

Focaccia is a delightfully greasy Italian bread full of olive oil, and in my version, lots of herbs and garlic!

We love eating focaccia with scrambled eggs at breakfast, dipping it into soups and stews, or just on its own as a flavorful snack!

Half a head of garlic (about 6 cloves), peeled and finely grated

Combine 3/4 cup warm water, sugar, and yeast and allow the yeast to proof for 15 minutes.

Meanwhile, mix the bread flour and sea salt in a large bowl (or in the bowl of a standing mixer). Once the yeast has proofed, slowly pour the yeast mixture into the flour while mixing, along with half of the olive oil, the remaining water, and the herbs and garlic. Once the mixture forms a workable dough, knead for about ten minutes. If using a standing mixer, use the dough hook to mix and then knead for about five minutes at medium speed, scraping down the sides and bottom with a spatula once or twice. Be careful not to over-knead, as it will cause the dough to become tough, and not rise.

Cover the bowl with plastic wrap, and keep the bowl in a warm area to rise until about double in volume. This varies with temperature, but takes roughly an hour and twenty minutes.

Pour the remaining olive oil into a roasting pan, or jelly roll pan. Put the dough in the pan and stretch it out to fit the pan or until the dough is about 1-2 inches thick. Carefully flip the dough once or twice as you work to thoroughly cover in oil. You may need to dig your fingers in to achieve this, thus giving the bread its characteristic craggy appearance.

Allow dough to rise a second time until nearly double, about an hour and fifteen minutes. (since it is smothered in oil, no covering necessary)

Bake for 10 minutes, then rotate the pan 180º, and bake until the top is golden and the oil in the pan is bubbling, approximately 10 more minutes.

Remove from oven and allow to cool. The bread will soak up the oil in the pan as it cools. Carefully rip the bread into serving pieces if you want a rustic effect, or remove to a cutting board and slice. 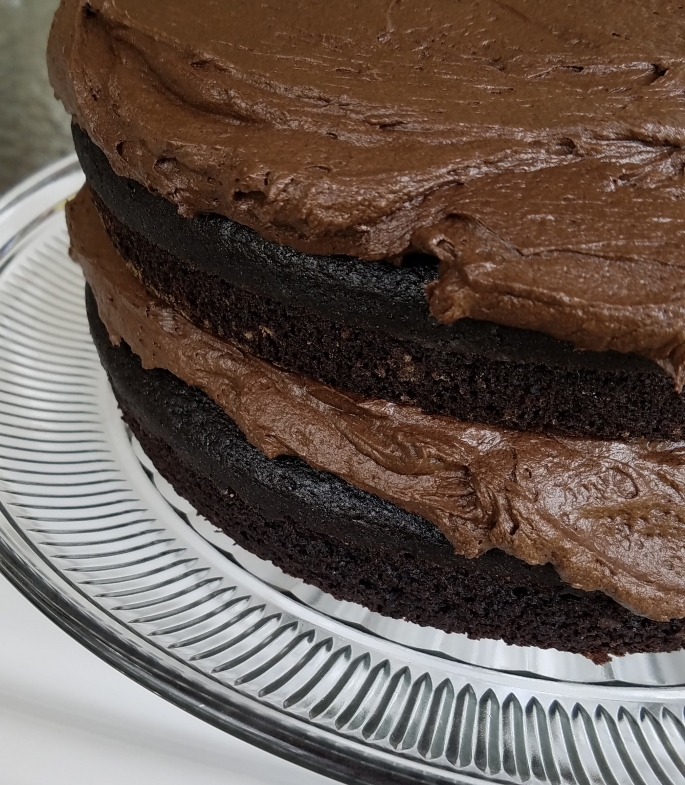 For the longest time, I struggled with “domed” cake layers that were impossible to stack properly, and required a lot of excess icing to fill in the large gaps on the sides. My cakes tasted delicious, but didn’t look professional.

Most of the time it didn’t bother me… until I would see a perfectly flat cake on Pinterest or Instagram, and be reminded of how I hadn’t “cracked the cake code”. Finally, in some obscure bakers forum I happened upon, I saw mentions of a technique involving wrapping wet cloths around the pans to facilitate even baking, and less doming. I tried to DIY but it was an added annoyance, the cloths kept slipping off, and I felt that the fire hazard from my homespun solution was very real.

Until my Amazon addiction paid off yet again, and I found these babies while browsing the baking section (photo below).

They claim to be effective and easy to use. (And I got mine for $8.91, score!) Based on my trial, I’m here to happily confirm!

These adjust to fit almost any typical-sized pan, are relatively easy to handle, and produce a professional looking layer cake.

According to the directions, I soaked mine for exactly five minutes. They floated, so I ended up weighing them down with a plate. 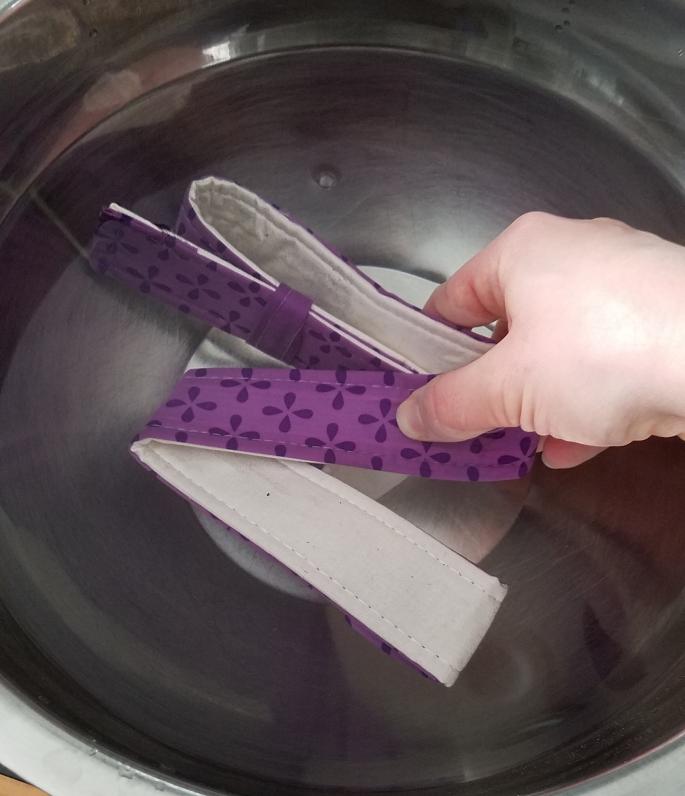 They fit easily around my cake pan, but they do slip a bit and require extra attention when handling from counter to oven. 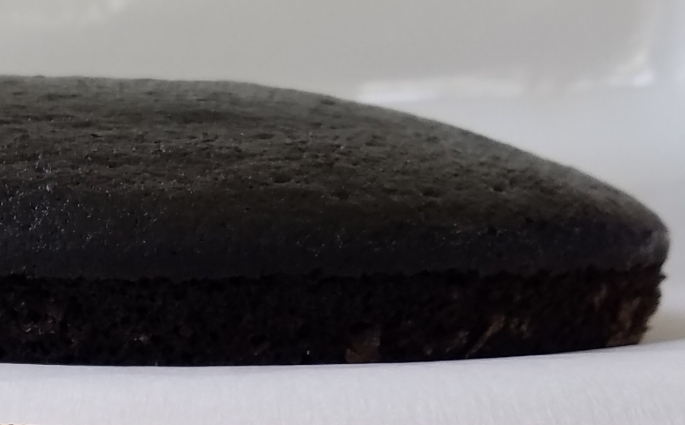 Pretty impressive, for minimal cost and effort, right? I’m also pleased that I no longer need to painstakingly slice off domed sections and essentially waste food when I want a professional looking cake. As you can see in the bottom image, there is a very slight doming effect. It wan’t enough to be visible in the finished cake, but next time I’m going to try soaking the strips longer than the directed 5 minutes and see if it makes a difference. In any case, this technique is…

a piece of cake!