A good roast is an ideal main dish to serve for gatherings of family and friends. It gives you a large amount of hearty fare for minimal effort, fills your home with a welcoming aroma, and presents beautifully on the table as an edible centerpiece. This recipe calls for pork loin (NOT the same as pork tenderloin), and surprisingly little else. I love this recipe because it provides a long of bang for my buck, and gives me time to spend on more complicated side dishes or desserts. This recipe also provides its own gravy of deglazed au jus. Perhaps the only tricky requirement of this recipe is the necessity of a lidded, enameled cast iron cooking vessel. While Le Creuset is quite an investment piece in most kitchens, recipes like this show how worth it one of these dutch ovens is. If you don’t have enameled cast iron, a large lidded casserole can be used. 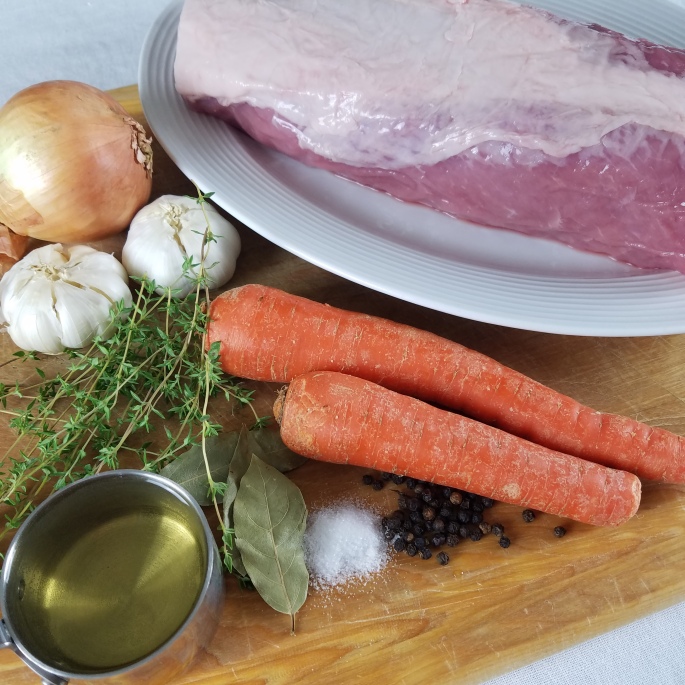 2 heads of garlic, peels and chopped

½ to 1 cup of flavorful Chardonnay of choice

If possible, salt the meat the day before you plan to cook, to allow more time for the dry brine to permeate the pork loin. (Roughly a tablespoon)

Heat two to three tablespoons of cooking fat on medium-high heat (I use a blend of half butter and half coconut oil) in an enameled cast iron dutch oven large enough to fit the pork loin (a skillet may be used if you don’t have a dutch oven) until the oil is quite hot, almost smoking. If you weren’t able to pre-salt, sprinkle sea salt and pepper to taste all over the meat, roughly a tablespoon. Thoroughly sear each side of the meat for several minutes on each side, until there is a rich golden crust all over. Remove to a platter.

If the cooking fat has scorched, you may carefully pour it out and put fresh fat into the dutch oven or skillet. Heat on medium, add onions, and cover. Saute for a few minutes until onions are fragrant and translucent. Add carrots, stir, cover, and cook for a few more minutes.

Add the pork loin back to the dutch oven, fat side up! (or transfer the carrots, onions, and meat to a casserole dish), and add the garlic, thyme, and bay leaves. Cover, and slide into oven. Bake for about 2½ hours, or until the center of the thickest part of the roast reads 180-185ºF on a meat thermometer, and the meat is tender. Baste with the juices from the bottom of the dish a few times during cooking, and rotate the baking vessel every 30 minutes to facilitate even baking.

Once the meat is cooked, carefully remove to a platter, and cover in foil for 15 minutes. Pour wine into dutch oven, and simmer uncovered on the stove for about five minutes, or until slightly thickened. Scrape the bottom and sides of the pot and mix into the liquid to not lose any flavor. Add salt and pepper if necessary. Carefully strain all the contents of the pot through a sieve into a gravy boat, and gently mash the soft vegetables with the back of a spoon to release every bit of rich liquid.

Serve with baguette, rice, potatoes, or anything to catch every drop of the gravy. In the photo, I’ve served this pork loin atop a bed of Duchess potatoes piped through a piping bag.