To be honest, I don’t really know what this post is about. I thought I experienced an epiphany, but now that I’ve started typing, I feel a little foolish. My idea was to start… journaling, I guess? Journaling publicly online? I guess that’s what blogging really is, right? So far, I have only ever posted about specific topics on this website (recipes mostly), but maybe I’m missing something. I don’t read any blogs, so I haven’t a clue how they are supposed to work…???

“WIR” is my abbreviation for “Week in Review”. Not a creative title, but that’s what I’m giving you. I have about 700 subscribers on Instagram… it isn’t a lot by most people’s standards, and the number has grown very slowly over the years. This is all perfectly fine with me, as I don’t consider myself a “real blogger”.. just a constantly frazzled wife and mother who likes all things fancy and decadent, but can’t afford it. I’m just fiddling around and having a bit of creative me-time and bonding time with like-minded people online.

Despite my humble online presence, I seem to receive a lot of positive feedback and camaraderie, so… this series (if that’s what it becomes) is for you! For those of you that enjoy my little Instagram posts, and may enjoy a bit more “meat” to it.

Thought of many profound insights to share. My memory was immediately wiped clean as I sat down at the keyboard. C’est la vie.

Mostly spent the day trying to catch up on housework after a busy weekend… the usual Monday routine. I also researched some local traveling petting zoos. We are hoping to schedule one to come to Second-Born’s… actually, believe it or not she DOES have a real name…. let’s start that again: Adriana’s birthday. There probably won’t be a lot of people there, unfortunately, but hopefully she can at least have a pony to ride! We’ve had friends move away, and we live in a rather out-of-the-way area ourselves, any many of our friends and relations simply struggle to make the trip for this sort of thing. We do have some neighborhood friends that I hope will make it, but since I am admittedly pulling this together pretty last minute, I’m not holding my breath on their attendance. Adriana has fallen in love with the 1935 film version of “A Midsummer Night’s Dream.” Yes, you read that entire sentence correctly. So far I have a wig and silver dress for her to vaguely resemble Queen Titania and her fairy attendants (see below). 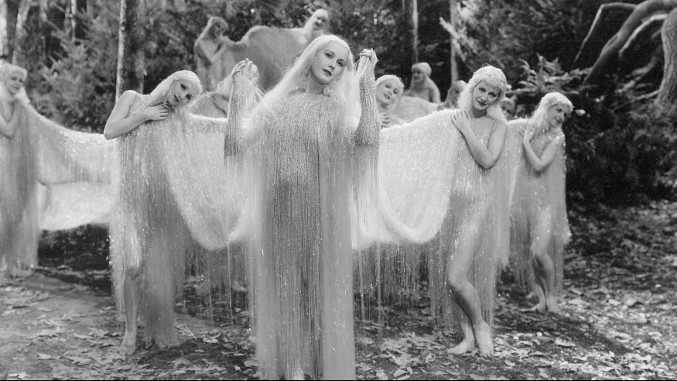 It would probably be best if I reserve the bulk of my party-specific info for a separate post, just to keep things organized.

While I did manage to get the blog post up about Sophia’s Easter dress, I still need to type up one for Adriana’s.

Adriana and I made her favorite blueberry waffles this morning, and tried to do a cute little photoshoot. My photography skills are still abysmal, so the whole experience really only produced a tasty breakfast that First-Born (aka Sophia) inexplicably snubbed, and fodder for my middle child’s already robust ego. We used the recipe from “American Girl: Breakfast and Brunch” and it really is tasty.

Adriana decked herself out in her Williams-Sonoma apron (logical) and an ill-fitting and unnecessary chef’s toque (illogical), also from Williams-Sonoma.

I hand-whipped some cream to dollop on top, but didn’t account for the heat emanating from the fresh waffles. As we tried to rush through some fancy “Instagrammy” food shots, the whipped cream melted and our plate was left looking more sloppy than elegant. It tasted marvelous nonetheless. Thanks to Sophia’s snobbery, the rest of us enjoyed extra portions.

While the recipe states frozen berries may be used, I personally recommend using fresh. We used frozen blueberries in the past, and the melted juices tinted the whole batter a rather sickly purplish-grey. I think that’s why Sophia was repulsed when she discovered what was on the menu. Fresh berries hold up better in the batter (yes I did that on purpose), and I think they come out looking nicer.

I’ve also filmed a YouTube video about my new Hobonichi Techo Cousin planner. It is currently uploading…. almost 3 hours for a 10 minute video? Is this normal??

Third-Born (known by the family as Gabriella) has barely slept for the past week. I think she had several large back teeth coming in all the same time!! It seems all our suffering has come to an end today, thank GOD!!!!! Her nap started a little before 12:30 and it is now 3:55 and she is still asleep! Poor thing. Hopefully the worst of that drama is finally behind us.

I used the “unicorn method”. This was my first time EVER cutting my own hair. At least not since some surreptitious snipping back in grade school…

The rest of my experience is posted here, under the “Beauty” tab, because this was such an ordeal that it does require its own post.

Other than typing this entry, I chilled-out with social media today. I feel like I burn out very easily when it comes to social interaction, and it seems to include social media. Why am I like this? It’s a significant handicap considering I rely on other humans for my own survival, and I even want to socialize sometimes… it just kind of kills me a little inside if I do it for too long. I’ve always been like this. I was the kid that went alone to her bedroom during her own birthday parties. Ugh. Since I can’t think of a solution, I guess all I can do is keep trucking along as best as I can.

The girls did well with homeschooling today, although our lessons have been pared-down to the bare necessities since Gabriella has entered the Terrible Twos (which really started when she turned 1). Adriana is still to young to be required to undergo standardized testing to comply with our state regulations, but Sophia is gearing up to take the CAT6 through Seton Testing Services and if any of my readers have any insight they would like to share on this subject, I would appreciate the input!

I’m going to give the two oldest fresh pedicures, and I want to do my own mani/pedi tonight, but we will see how that goes. It all really depends on Gabriella… I can hardly give my nails time to dry if I am obliged to attend a screaming toddler throughout the evening. But as I mentioned on Tuesday, she seems to be over the miserable sleeping rut she was in for a few weeks.

How could I forget my most exciting news? I have a professional salon appointment set for tomorrow morning at Blonde Salon, to fix the embarrassing cut I gave myself yesterday!!! I’m really thinking about adding long, swept-away bangs….. hmm… this may also be better as a separate post.

The haircut turned out fantastic! Jennifer did a great job, and if you are in the area, I recommend her! I will save the rest of the haircut info for a separate post… you’re probably picking up on my love of compartmentalization and organization…

The most exciting event of the day, nay… MONTH… was when I looked out the window and discovered our neighbor had cut down a large tree! My first thought was for the lovely fragments of trunk that were already cut into the perfect height for chairs or tables for Adriana’s fairy party! What could be more whimsical and appropriate for our Midsummer Night’s Dream fête that real logs and stumps strewn about the garden for seating etc… with English ivy still clinging to the bark? Nevermind the fact that the sap is still flowing from the freshly cut wood, and guests may find themselves stuck to their seat at the end of the evening…

I was thrilled about the logs, and then he approached me with a nest he had found in the tree, still with two teeny blue robin’s eggs. He asked if we had any interest in them, otherwise he’d leave them out for the animals. I said the girls would love to give interspecies maternal instincts some exercise (let’s be honest, so would I), so we took them. The girls were full of high hopes, and of course I was too, but after rotating around the sun more that 30 times, I had a realistic expectation that this probably would not result in healthy adult birds. It would be a miracle if they even hatched. But I was determined to do what we could. My children are very fortunate, and have never experienced  grief…. and we haven’t had pets, so their personal understanding of the “circle of life” is limited to cold theory. It is a punch in the gut when actually experiencing it first-hand.

We have zero incubation equipment, so our Hail Mary was human body heat. Sophia cut two compartments out of an egg carton, which we further padded with tissues. We placed the eggs inside, taped the carton shut, and took turns holding it our warm laps, with sheepskins and blankets piled on top to retain heat.

I carefully slept with it in this position at night. It was like when my babies were newborns and we slept with them in bed with us: I barely moved all night…. instinctively aware that there was delicate life right next to me.

I felt absolutely ridiculous after waking up next to a carton of robin’s eggs. I determined to try to figure out if there is any way to see if the buggers were even alive before I invested more of my time sleeping next to rotten eggs. I seemed to remember people holding eggs up to a light source to determine….. something.. what was it? Thankfully I live in the age of Google, and quickly learned this technique is called “candling”. I saw a few videos online, and this 4-minute video was one of my favorites. We used the method on both eggs, and determined that one was clearly a “late death”. This 5-minute video is utterly fantastic and also shows examples of how dead eggs will appear during candling. We took the dead egg outside, and cracked it open to study before leaving it to fate nature had intended all along….. nourishment for another living being.

The other egg actually had movement!!! I recorded it in a YouTube video of my own, but it was really hard to get the lighting right. I could even occasionally see something thin and opaque that appeared to be maybe legs moving against the shell.

A subscriber from Instagram suggested placing the egg in another nest to be adopted. A genius idea!! Only problem is, I was unable to locate another nest. I made a note to myself to keep better track of the nests in our area for this very purpose should the need ever arise again.

Back into the carton and laps it went.

When I candled it at night before I went to bed, I noticed reduced movement. I bundled up with it again at night.

Upon coming downstairs, I candled the remaining egg, and determined it was dead.

I broke the news as gently as I could when the girls came down, but they reacted as I expected. It was a heavy blow, but important to experience and work through. They will work through it, but grief takes time… even for something as “foolish” as a common bird egg. I’m glad they have the compassion and empathy to understand and care. When they are ready, we will take it outside to reunite it with the Circle of Life, and allow it to keep life going for another hungry garden resident.